Join film producer and director Siciliana Trevino at Moe’s Books Tuesday April 7th, at 10:30am for the launch of her Kickstarter for New Mo’ Cut: David People’s lost film of Moe’s Books.

In early February when I started working on New Mo’ Cut: David Peoples lost film of Moe’s Books I didn’t know who shot the found 16mm footage of Moe at the opening night party for his Telegraph Avenue bookstore and I never thought I would launch a crowd-funding campaign. By mid-March the discovery that the filmmaker was Oscar-nominated screenwriter David Peoples’ shocked me as did the realization that crowd sourcing is a dynamic way to build a community around the film, while raising vital funds that will help me bring this unique Berkeley story to the big screen. I couldn’t miss this opportunity to take the New Mo’ Cut to the next level and learn how to navigate the scary all-or-nothing world of Kickstarter.

Now I’m half-way through the interviews and my first crowd sourcing campaign launches tomorrow! Please join me and Doris Moskowitz at Moe’s, Tuesday April 7th at 10:30am for a sparkling cider toast as I push the big green launch button. The campaign runs from April 7th to Friday May 8th, 2015. We hope to see you there. Click here for the Kickstarter preview and be one of the first to see our reward offerings. I look forward to sharing updates and insights on our progress over the next 31 days. 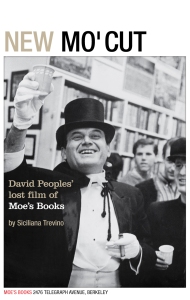 New Mo’ Cut: David People’s lost film of Moe’s Books is a short documentary chronicling the surprising discovery at the Berkeley dump of a 16mm film of Moe Moskowitz at the opening night party for his legendary Telegraph Avenue bookstore in 1965.

Kevin Laird, a recycler working for Urban Ore, found the film canister and managed to deliver it into the hands of Moe’s daughter Doris who didn’t know of its existence or origin. Soon after the film is digitized and put online, Doris discovers the filmmaker is Oscar nominated screenwriter David Peoples. The two-minute, forty-six second workprint is a time capsule of Berkeley and a peek into his Peoples’ documentary film explorations before gaining notoriety as a screenwriter rewriting Blade Runner, earning an Oscar nomination for Unforgiven and co-writing 12 Monkeys with his wife, screenwriter Janet Peoples.

New Mo’ Cut: David Peoples lost film of Moe’s Books recalls one of Telegraph’s larger than life characters, while musing on books, filmmaking and reclaiming history from the waste stream.