When you break down the wall, everyone wins.

With over 400 participants and 100 teams gathered at the edge of the future, overlooking the Charles River no less, the chance to work in the Media Lab with the people and tools at the heart of the industry including Oculus, HTC Vive, Microsoft, Google, PTC/Vuforia, and Magic Leap, was entirely radical for a tech-obsessed Berkeley girl like me.

Greetings from the future 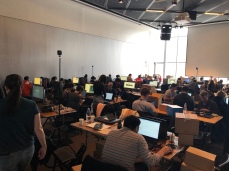 “Is it real or is it memorex?” 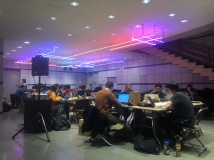 The first player establishes a playroom that others can join on AR enabled phones where they are separated by a virtual wall of ice cubes. You launch charmed projectiles by tapping at the cubes which randomly release a prompt for a short ice breaker game.

When you breakdown the wall everyone wins, incentivizing players to dismantle the divide between isolation and shared moments of delight.

I met Sabio on the first day of the Hack through a mutual friend, VR artist Chelley Sherman. He sparked the idea for the social AR game by saying we should get level ups and coins for meeting our online friends in the real world. I agreed and had the proverbial lighting strike of inspiration, where I saw the whole game and a room full of hackers with charms floating over their heads. From then on I knew I wanted to make something that would be fun to play at the Hack’s Expo Day.

Day 1’s schedule of workshops and classes, especially the Vuforia Studio U/X courses gave me the confidence my idea was within the realm of possibilities given the submission deadline on Sunday at 1 pm.

Later that evening before the opening ceremony Sabio introduced me to Atlanta-based installation artist and developer Kris Pilcher. It turned out we were already friends on Facebook but had never met. Fortunately, Kris wanted to learn how to use Google’s cloud anchor integration in Unity, so after the project pitches and considering a handful of teams he agreed to support my project and build Ice Breakers using ARCore, Unity and Google’s cloud anchors integration that debuted at Unite Berlin last June. According to Unity, 90% of the top grossing apps on Google Play are connected games. We were also building with accessibility in mind, ARCore is enabled on upwards of 250 million mobile devices.

Day 2, Friday morning Team Ice Breakers quickly set up our work space in the lower atrium of E-15, The Wiesner building and original Media Lab, designed by I.M. Pei (’40). It’s the site of one of MIT’s infamous pranks, 1994’s “The Pei Toilet”.

The interior,  with its “Here – There” tile installation by Kenneth Knowland is a portal to 1985, a 100% pure source of the Vaporwave aesthetic, that reminded me of my favorite MST3K film, “Overdrawn at the Memory Bank” starting Raul Julia.

We took to the 3rd floor of E14 to brainstorm and sketch out the game wire frame, listing our tasks for the mechanics and art, and left open questions about the how players would interact and collect rewards. 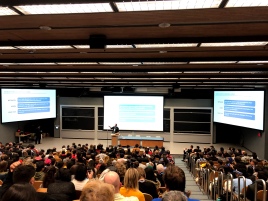 I was responsible for the team lead administrative tasks and making the projectiles, the logos, the theme song, the icebreaker prompts and later the ice wall. I made the 3D game assets on the Rift with Oculus Medium, and the 2D assets with Illustrator and Photoshop.

Anish Dhesikan, Hackaton Mentor and a Software Engineer at Google Daydream VR/AR, helped guide us through the technical challenges we had networking the phones. He won Grand Prize at the 2016 Reality Virtually Hackathon.

Charity Everett, also a Hackathon Mentor, Research Fellow at MIT Open Documentary Lab and ARVR Women Futurist in Residence, was instrumental in getting us to expand our thinking and purpose. She helped us improve the game by recognizing that the motivation for rewards would undermine authentic exchanges, and generate a false rapport based on short-term personal gains.

I was grateful for the feedback although a little discouraged, however, we still had plenty of work ahead of us before we had to make final decisions on the mechanics. There’s almost no time to consider anything beyond what’s immediately in front of you. I feared I’d turn into molasses if I spent too long worrying about decisions that weren’t at the top of my list yet.

By 8:35 pm Kris had established the multiplayer functionality.

At 9:07 pm we started testing the anchors. The building closed at midnight but we wrapped around 11:30 pm and a bunch of hackers went to The Automatic in Kendall Square for their addictive late night flat burgers.

Day 3, Saturday, the collisions were working by noon, and the big decisions were now before us. How does Ice Breakers start? Are both players behind blocks of ice? In their own igloos? Who takes the first turn?

Charity’s feedback allowed us to re-think the mechanics. Around the corner from the Media Lab, the hedges in front of Lobby 10 became the prototype for our engagement solution: Simplify. The barrier between players is a single wall of ice – which also serves as the cloud anchor to connect the devices.

A virtual wall between players shifted the motivation from what you get by breaking through, to what you contribute, rewarding players for collaborating and creating shared moments of delight. 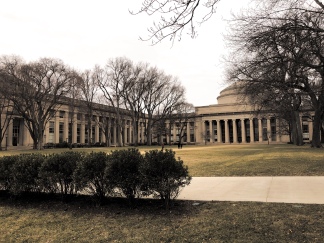 Tear down that hedge!

Kris started building in our new direction and I googled the world of funny, odd and awkward Ice Breaker games. I also had to make a scratch video for our first deadline which involved setting up our Devpost profile by 6pm to get an official number of some kind.

By 10 pm we were testing the main game components: players joining the virtual room, setting the space, placing the wall and launching projectiles that make a retro-laser “pew-pew” sound when they strike the cubes.

I was running out of time on the theme song. I’m not a gamer but one thing I know is that you have to have catchy tunes.

The day before, a few musicians hacking in the main building came over to E15 to play the piano that’s under the atrium’s staircase. As I was fabricating the projectiles in Medium (stamps of hearts, thunderbolts and music notes) I hear the quirky keys of “Heart and Soul”, the 1938 Hoagy Carmichael and Frank Loesser classic,  known the world over as the song Tom Hanks plays in “Big.” It made the perfect theme song, but I couldn’t break my momentum and cause a delay in delivering the assets to see if they would record it. And then I couldn’t find a version online that I liked.

At 11:30 pm Saturday, I asked Chelley if she knew any musicians at the Hack that could play the piano. She recommended the team hacking next to her, who happened to be the same musicians from the day before, (whose name’s I’ve written some where!) and we recorded the music just as I remembered it.

Serendipity continued to light our path as we found ourselves in the presence of Joe Davis at his studio surrounded by his crystal radios, coils and clocks set ahead by an hour. The legendary Bio-artist, poet, and Artist Scientist at Harvard Medical School / George M. Church Laboratory, suggested we find a way to add a clip of President Reagan’s 1987 Tear Down This Wall speech. Of course – it should launch the game in a salute to Joe.

Day 4, Sunday, the Hack’s “Pencil’s Down” deadline is at 1 pm. In the morning I downloaded the Reagan clip, cleaned it up, added our Heart and Soul soundtrack and transferred it to Kris.

At 10 am I went to a prep meeting for submitting the project and the judging process.

Kris powered through the final build, and was almost kidnapped by another team, “Together”, who needed help with their cloud anchors. I followed them and demanded his return, but compromised and said they could bring their laptops over to get his help. We were in good shape but with just a few hours left, the thought of him leaving the table terrified me.

Shall we play a game?

It all came together. Kris committed the project to GitHub at 12:30 pm. We completed a simple 10 minute demo for a team of judges at 2:35 pm. I was exhausted and dehydrated but still standing. Whether or not we made the finals, our game was a hit.

The team Kris helped? They won first place in our category of Games and Learning.

Day 5, Monday, We gave our first public demo to rave reviews. Players had this to say:

Expect the unexpected at the MIT Reality, Virtually Hackathon.

I never would have imagined I’d spend a week at the MIT Media Lab in an 80’s building literally frozen in time, (during a government shutdown over wall funding) researching ice cubes to make a wall in VR for a multiplayer AR game, or YouTubing a 1987 clip of President Reagan, to use for game instructions thanks to Joe Davis.

Ice Breakers is essentially a game for Daniel Sabio to play, inspired by his zany imagination. He’s the Glad Scientist experimenting with realities after all. He served as the ideal player and stars in the demo video which I filmed and edited in the final hours of the closing dance party in E15 on Sunday night.

Initially I went to the Hackathon interested in making a memorial for the 54 journalists who were killed in 2018 – the most in decades. I was covering some dark and heavy places and the idea for Ice Breakers allowed me to do something completely opposite and novel, while organically evolving into a game that touched on timeless themes and the common struggle of overcoming barriers to establish new and authentic relationships.

Check out our submission on devpost!

And stay tuned for Ice Breakers on iOS and Android.