The informal morning gathering is inspired by an ambassador group I was a part of at the Berkeley Chamber. A few of us would linger after our monthly breakfast meeting, drink more coffee and have the kind of water-cooler conversations that sparked ideas and connections, but that can be hard to come by for people who work independently, from home or don’t have evenings free for networking events.

Naming ourselves after David Fincher’s 1999 film captured the group’s back to basics, no-frills shop talk and the camaraderie between people with unconventional work. Our first rule? Don’t chew with your mouth open.

Working in immersive tech, where attending the multitude of industry conferences and festivals can cost thousands of dollars, I’m more likely to see my colleagues as 3D avatars in an alternate reality than be with them in real life. Breakfast Fight Club for ARVR Women and Allies is an unplugged cafe meetup where we drink coffee (or tea), grab a bite and share the latest from the virtual trenches. Demos welcome but not required.

During our inaugural breakfast,  a gathering of VR producers, gamers, animators, makers, instructors and engineers, shared tips about the tools we use, VC funding, content, upcoming conferences and more, check out the links below! 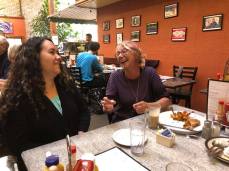 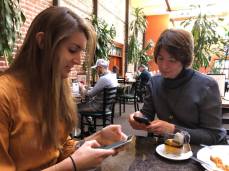 WXR Venture Fund 2nd WXR Pitch Showcase Founder Application – Apply by April 15th. If selected for our second cohort, you’ll have the opportunity to present to top industry investors, entrepreneurs and industry executives. You will also be enrolled in the WXR Mentorship Program and paired with a curated Mentor match. The 2nd WXR Pitch Showcase will be held at AWE, the world’s largest AR conference, on June 1st, 2018 in Santa Clara, CA.

“Called All Raise, the group, now with 36 women, granted Forbes exclusive access as they try to rewrite their industry’s playbook. The stated mission is to double the percentage of women in VC partner roles over the next ten years and increase total VC funding to female founders from 15% to 25% in five years. All Raise was already the invisible hand behind two of tech’s biggest diversity efforts in recent months: the mentoring series Female Founder Office Hours and a 700-startup pledge for diversity called Founders for Change, featuring tech billionaires like Instagram founder Kevin Systrom and Dropbox CEO Drew Houston.”

F8 May 1st -2nd Two days of learning and discovery as Facebook showcases new tools and the amazing work of the developers who are using them. Attend sessions tailored to your interests, interact with Facebook products and experts, and enjoy more networking opportunities than ever before. Whether you’re with us in San Jose or tuning in from around the world, there’s an F8 experience for everyone.

VRLA May 4th-5th Experience the next generation of immersive and transformative technology at VRLA 2018! The VRLA Expo hosts a thriving community of developers, entrepreneurs, enthusiasts and more, all excited and curious about this modern renaissance of virtual reality, augmented reality and immersive technology. This year’s theme, ‘A New Reality,’ represents an expansion of the expo’s scope beyond VR and AR to explore new ways emergent technology improves our lives both in and out of the headset.

Nicole has a pre-release of the Vive Focus HMD and brought it to breakfast so we could hop into a Parisian apartment, find clues and solve puzzles that reveal secret transformations.

NeuroExplorer VR Fifer Garbesi’s Oculus launchpad-winning experience takes us through the the evolution of the human brain from brainstem to neocortex. Along the way, explore the potentials of brain computer interfaces by virtually stimulating neurons.

Good thing these two producers sat next to each other at breakfast as each one had access to a headset the other was looking for – Nicole helped Fifer with a Google Daydream headset, and Fifer helped Nicole get a Microsoft Hololens.

UTurn  What happens when a young female coder joins a male-dominated floundering startup that’s deep in an identity crisis? With a comedic twist, UTURN is an immersive live-action VR series where you get to experience both sides of the gender divide. Now available for Gear VR

Although Producer Nathalie Mathe couldn’t join us, Catie Lee of SF Bay Area Womxn in Games was with us, she consulted on UTurn’s UI. We talked about the award-winning piece as an example of a pioneering, sophisticated narrative structure that takes advantage of viewer agency and character embodiment to reveal blind-spots and multiple perspectives on the gender divide.

Minds “is an open source and decentralized platform for Internet freedom. Get paid in crypto for your contributions to the community. Earn tokens by selling exclusive digital content with custom rewards to your supporters. The Wire peer-to-peer payment system is fully autonomous on the blockchain.”

Quill “is the VR illustration and animation tool built to empower artists and creators, whether to create final art or as a production tool for concept creation aid. It is designed to be intuitive to artists. It’s expressive, efficient and comfortable to use over a long period of time. Quill allows users to paint and animate in virtual reality on an infinitely scalable canvas – with rich colors and intuitive tools. Quill is designed to be expressive, precise and to let the artist’s “hand” come through clearly – whether that’s a watercolor style, pencil style, oil painting style or other. Non-creators can download Quill to experience amazing illustrations in our pre-loaded showcase and have an experience completely unlike viewing a painting on a wall in a traditional gallery.”

Adobe Character Animator – for 2D characters – “tracks your facial expressions — from raised eyebrows to moving lips — in real time and records your motion and voice using your webcam and microphone. So when you look surprised, happy, or angry, your character does, too.”

ARVR Women and Allies is a group for women in the immersive tech industry that supports community connection, education and professional growth.