Pitt plays Tyler Durden, Norton’s devilish alter-ego, a soap salesman who moonlights as a domestic terrorist and leads a viral underground network of bloody boxing fights. Our club doesn’t actually fight. We drink coffee, talk about immersive design and hardware. Bring your business card if you want a chance to win a bar of soap in our raffle.

Since our first BFC at Au Coquelet in Berkeley, we’ve had about a dozen breakfasts in the U.S and Europe (2 in the UK, 1 in Germany). One of my favorites was our most attended breakfast at OC5, Oculus’s developer conference in San Jose.

What I love about them is that we’re usually anywhere from 5 to 12 attendees, which gives everyone a chance to talk about their work.

But, if you’re like me and you work from home, have looming deadlines and don’t need to be in a car, bus or train before 10 am, it’s an almost heroic effort to be there.

There’s no offense if you RSVP’d and don’t show up. Don’t apologize. We start at 8:30 am – I’d probably miss it too if I wasn’t hosting them. It’s okay to be late. You win the battle by simply showing up.

Breakfast Fight Club is a jolt of real-world camaraderie with other early adopters who are defining a space for themselves in an uncharted, rapidly expanding universe. The price of admission? Buying a cup of coffee or tea, maybe a doughnut. 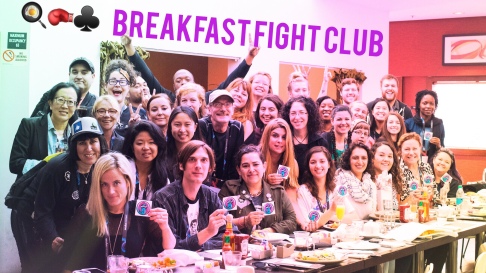 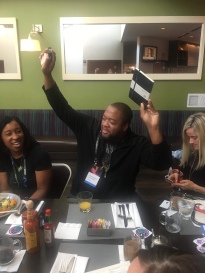 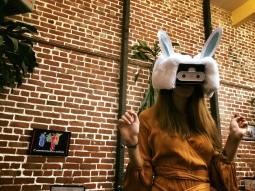 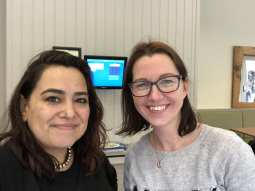 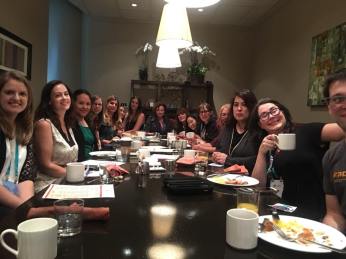 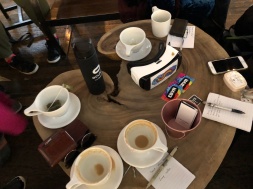 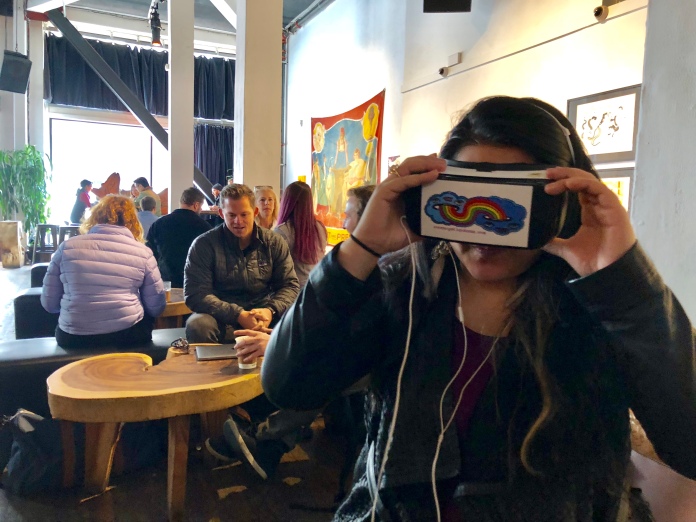 You suddenly find access to the latest headset you needed or get leads on funding and incubators. Portfolios and demos are shared. Websites and numbers are exchanged. When it’s over at 10 am, the conversation keeps going. 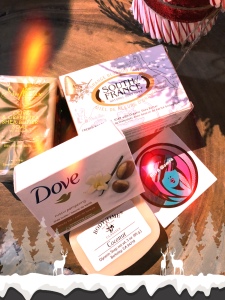 On a recent Thursday morning a total of six attendees, myself included, met at our main location, 111 Minna Gallery in San Francisco, for our last breakfast of the year.

During our final round of 2018, the group talked about what brought us into immersive tech, developer pain points, user interface design, and news we’re anticipating in 2019.

We had a soap exchange and raffled off a Special Edition Fight Club DVD – congrats to the winner, 3D artist, Corinne Murchinson.

2018’s Champion of Breakfast Fight Club, is Tara Packard, with the highest attendance.

Keep reading for the roll call and links to resources we shared and found.

For details on our upcoming BFC’s in 2019 we welcome you to join our meetup group .

is a 3D Artist, Explorer, Life Interpreter, and Artist by Nature. “VR is the stepping stone to the future.” Everything’s leading to holograms. In 2019, “Looking forward to new creative opportunities to use my modeling skills in immersive and special effects work.” A persistent developer pain point for indies (and consumers) are hardware costs. Events like the recent Microsoft Mixed Reality Hackathon, where organizers gave participants Lenovo headsets, are crucial to welcoming more developers into immersive design.

Back from the black: should Amy Winehouse and other stars be turned into holograms? – Laura Barton, The Guardian

is MozillaXR Fellow, and recently received honorable mention for her and engineer Jasmine Roberts’s submission to Mircrosoft’s Mixed Reality Hackathon. She is a Co-Chair of ARVR Women’s Futurist in Residence program which is increasing multi-cultural leadership in immersive tech by putting AR headsets Magic Leap One and HoloLens 2 in the hands of influential and emerging artists.

creates emotive interactive animated experiences in games, apps, AR, VR & immersive real-time virtual worlds. In 2019 “Niantic will come out with something big. When we talk about diversity in tech we need to also address ageism. No one retires at 60 anymore.” We need a truly inclusive framework that considers inter-generational, accessible input design principals for haptic, gesture, voice control and beyond.

Designing for Accessibility is Crucial in VR and AR – Alexandria Heston

At the New York Tech Zine Fair, the Digital and the Tactile Converge

The Kapor Center for Social Impact aims to make the technology ecosystem and entrepreneurship more diverse and inclusive.

XR Software Engineer, is originally from a physics (optics) and computer engineering background, she is an “anti-disciplinary” design researcher with interests converging at immersive computing, mixed-reality and interaction. For the past 5 years, she has been researching computational spatial design and considering how digitally generated realities can enhance sensory ability and proprioception– ultimately to enhance human connectivity. In 2019 Jasmine is looking forward to better user interfaces for experiences. “It’s not out there yet. We’re still building the fire.”

Book: The Design of Everyday Things by Don Norman / Nielsen Norman Group   “We are user advocates. We help companies move toward human-centered products and internet interaction, the better to play a major role in the new world of customer-centered goods and services.”

“Affordances” – The Glossary of Human Computer Interaction The concept of an affordance was coined by the perceptual psychologist James J. Gibson in his seminal book The Ecological Approach to Visual Perception. The concept was introduced to the HCI community by Donald Norman in his book The Psychology of Everyday Things from 1988. There has however been ambiguity in Norman’s use of the concept, and the concept thus requires a more elaborate explanation.

Virtual Artist: Chelley Sherman – Her work is governed by patterns and texture which harness the neural systems that underlie enthrallment in darkness, ritual, reverie. Her practice consists of experiments with different mediums and displays such as virtual reality, projection mapping, and interactive audio visual installations.

Advanced Identity Representation (AIR) Project at MIT – We utilize a custom-made digital platform called MazeStar that allows students to explore their ideas while learning about human-computer interaction, web design, privacy, coding, debugging, and more. A component of MazeStar is a game-like programming environment called Mazzy in which students learn the building blocks of coding.

Microsoft Mixed Reality Capture Studios we record holographic video – holograms of dynamic people and performances. Your audiences can interact with your holograms in augmented reality, virtual reality, and on 2D screens.

Visual Artist and Developer, started in VR through incubators in the east and west coasts, but has been following virtual worlds ever since Second Life. She also works with photogrammetry. In 2019 she is personally “Looking forward to launching my business, Imaginary Objects.” Industry-wide, “Audio takes off. Looking forward to working with new ambisonic mics and AR toys.”

Mics that record in “3D” and ambisonics are the next big thing – Peter Kirn, CDM

Bose Audio Sunglasses – Nothing in or on your ears – Bose

Pioneer Works is a cultural center dedicated to experimentation, education, and production across disciplines.

Merge Cube – the hologram you hold in your hand.

The Museum of Other Realities A new space for a new kind of culture, featuring a collection of artists exploring the possibilities of VR.

BFC Host, Filmmaker, AR/VR Producer was recently a judge at the AT&T Mixed Reality Hackathon, Magic Leap’s first official hackathon. In 2019 she’s,            “excited about working with ARVR Women’s Futurists in Residence, exploring how Magic Leap One and HoloLens 2 will impact art, design and the future. I’m curious if the Oculus Quest will become the Game Boy of VR. If it supports Facebook Spaces it could also be the Game Girl of VR. I wouldn’t call it the Honda Civic of VR.”

Capitol Region Accelerator is calling for AR VR entrepreneurs. Selected companies will receive $50,000. The deadline to submit applications is December 21, 2018. The upcoming cohort is slated to occur from January 28 to April 13, 2019.

That’s a wrap! Thanks to our early risers for an insightful conversation and reflection on the year ahead.

ARVR Women hopes to see you at a breakfast in 2019. Have a wonderful holiday and a happy New Year.